Ex-world Superbike racer Alex Buckingham made his entrance into the motorcycling world at the tender age of 6, tearing around his parent’s paddock on the back of his elder brother’s Suzuki TS 90 and a year or so later riding his own Suzuki 50.

At the age of 11, Alex had his first taste of competition, racing in a schoolboy moto-x close to his home at Shirwell, near Barnstaple.

After four years of motocross racing with various degrees of success and, after racing at British championship and team events, he moved on to Road Racing. Pushed by his uncle Big John, Alex raced a week before his 16th birthday at Long Marston Raceway on a LC 250 Yamaha. With a fantastic start he was in third position for a couple of laps before eventually finishing 7th.

After a season of racing on LC’s, Alex got his leg over a TZ350 G for his second season – what a mistake! After learning to ride it somewhat properly, he managed to gain his national licence and get backing from Ruda Holiday Park of Croyde Bay.

Towards the end of Alex’s third year, Jim (Alex’s dad), dug deep and purchased Tony Head’s ex-works 250 Armstrong Rotax. With this serious equipment Alex got down to business straight away. In his first race at Staverton, he was leading by a mile when it ate a stone and seized, but he had shown the first signs of things to come.

At 20, Alex earned his International licence and became North Gloucester and Port Talbot 250cc champion, along the way he was awarded man of the meeting, set fastest laps and teased the big bikes in the unlimited classes.

In 1988, despite having the oldest bike, new finances brought in by the MCN dealer of the year TVM of Newton Abbot helped Alex to move on to National competition. He started to get regular top ten finishes. The next year brought another sponsor, Damerells motorcycles of Cornwall. They gave Alex the use of a new CBR 600 Honda and entered him for the Challenge.

Alex won The King of Combe on his 21st Birthday, a fine way to start his fifth season! Racing in the CBR Challenge opened the door to a whole new range of circuits all around the UK.

500 miles from home at Knockhill in Scotland he crashed the CBR, ending up with his first visit to Dunfermline hospital.

During 1989 Alex’s father Jim passed away. He is loved and missed by all who knew him.

Next season TVM gave Alex a FZR1000 Exup on which to compete in the British Production Championship. A best place of 8th, gave him a good footing for next year. Meanwhile he would occasionally attend NGMCC meetings and set race and lap records.

Dave Hornsby of TVM lets Alex use a YAMAHA OWO1 for the British Superbike Championships.

Armed with the best bike available on paper, Alex picked up more product support and heads for a few club races to warm up. Winning virtually everything he entered including King of Combe again, lapping at over 100 mph on treads, Alex starts to make a name for himself in British Championships by finishing in the top ten amongst such names as Simpson, Llewellyn and Reynolds.

1990 season is without trouble and Alex notched up several more good top ten finishes in the Formula One and British Supercup races. He now was without a doubt one of the best real privateers.

1991, riders had been attracted back to Britain by the growing stature of Superbikes. Alex now had to compete against the likes of Rymer, McElnea, Makenzie, Whitham and Foggy! Not the least bit fazed, he continued his forward push and scored points at most races. He had top six finishes at National races such as the King of Cadwell, Race of Aces and Prince of Pembrey.

Andy Bell of ‘SIGN DESIGN’ offered his services to make Alex’s private Yamaha stand out from the pack.

September; another stroke of luck, Duncan and Julie Robson from Leeds, spot Alex’s potential and gave him the use of their FZR 600 for the rest of the season. Second time out, he qualified on the front row at Cadwell Park but only half a lap in, the con-rod snapped and destroied the engine.

ALEX FINISHED THE YEAR 17TH IN THE MCN SUPERCUP CHAMPIONSHIP.

1992, New sponsors the Robsons were more than happy with the previous year two rides and agreed to back Alex on his 750 for the year. They financed Alex, with (what seemed) a massive amount of money. Extra support came in from GT motorcycles and product support was plentiful.

Alex aimed to be top privateer in the coming season. With only one non-scoring race at Cadwell when he had a puncture, and finished the British Championship in 9th position.

With a budget of £10,000 Alex had pressured and beaten top teams with £200,000 budgets, he now was a recognized name in British road racing!

Alex placed an advert in the local free paper begging for sponsorship, as luck would have it local business tycoon, James McIlwraith, Managing Director of Inch’s Cider happened to read it and as he loved motorcycle racing, he rang Alex but as he was out, a message was left by Mr. McIlwraith.

Alex was told a Mr McElnea had rung about sponsorship, he thought it was a wind up and nearly didn’t return the call!

Alex was asked to a meeting at Inch’s Cider to discuss the possibility of sponsorship for the team next year. A deal was quickly put together for him to race under the Inch’s Cider ‘White Lightning‘ brand also allowing for Duncan and Julie to stay as team managers.

Altogether Alex now had some £40,000 to play with. An Iveco motor caravan was purchased and Yamaha’s latest YZF 750 SP and race kit quickly put on order.

1993 The season arrived but the bike hadn’t. Alex had to ride the 4 year old OWO1 for the first two meetings of the year. He started as if he meant business, Mallory park was wet, very wet. Alex stuffed them, he finished 5th in the first leg and then passed Rob McElnea for 3rd place in the second, ending up 3rd overall and on the podium!

Thruxton was cold and once again, Alex qualified on the front and finished top five.

A national King of Combe event was next on the calendar and Alex wanted to win on home ground! Alex qualified on the front row and five laps in was leading and gaining ground when the engine exploded, it instantly ruled him out of going to Thruxton the next day for the race, but more importantly he may have missed the next Supercup round at Oulton park.

On inspection, it was found that a faulty gudgeon pin was to blame for the failure. With such a new bike, parts were going to be nearly impossible to get. Luckily an engine was found in Yorkshire, at Tillston’s Motorcycles at the very expensive price of £3000! The engine was tuned by Yamaha Specialist Mike Parry of Race Techniques, Cheltenham and refitted in time for Oulton.

Oulton was one of Alex’s favourite circuits. On Supercup weekend the new engine wasn’t perfect but all the same with a faulty quick-shift he finished 10th in the first leg. For leg two, the heavens opened and it poured. Alex has his usual bad start and found himself working through the pack.

On lap 5, he had got up to 8th, and had a mention on the telly, for his progress. After two or three more laps he was going like a train and was now the subject of the tv announcer’s commentary. With 5 laps to go and full tv coverage, he was seen by millions of viewers as he overtook Mike Rutter and Brian Morrison, to take third in the race.

He was involved in a race long dice with the two of them, constantly overtaking and being retaken on the straights as his bike takes on water. Alex eventually had to settle for 5th rather than the podium but fantastic all the same.

View all the bikes we stock 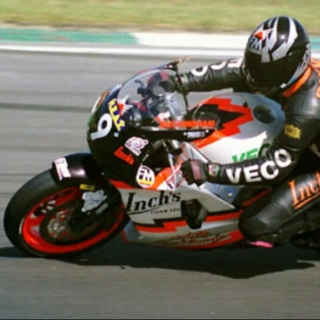